A Jones fracture – named after the orthopaedic surgeon, Sir Robert Jones, who reported on the injury in 1902 – is the name given to a break between the shaft and the base of the foot’s fifth metatarsal bone. This bone connects to the little toe, on the outside of the foot. A Jones fracture is recognised as the most common metatarsal fracture.

If a suspected ankle sprain does not respond to home remedies such as ice treatment, elevation and rest, then it might be you have suffered a Jones Fracture. In these cases, it is advised that medical attention is sought as soon as possible. Seeking medical attention sooner, rather than later, is especially pertinent given the ability of the fracture to worsen if not treated correctly. 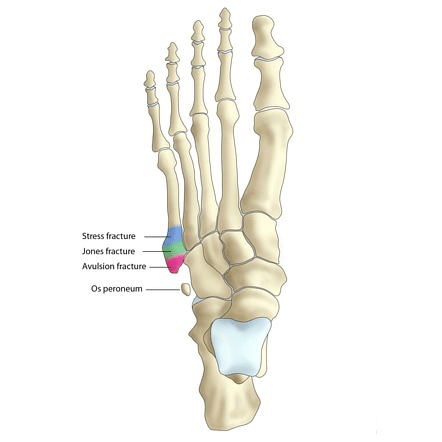 A Jones fracture is usually diagnosed via a physical examination, which is then typically followed with an imaging test such as an x-ray. Some types of fractures which affect the fifth metatarsal are hard to identify. The Jones fracture is recognised as the most serious of all the fractures which can affect the fifth metatarsal.

Whether a doctor recommends a non-surgical treatment such as immobilisation, or a surgical procedure to treat a Jones fracture, can come down to a range of factors. These factors can include how severe the fracture is; the overall health of the individual; the individual’s age; and the individual’s usual level of activity.

Due to the relatively fast recovery time, and high success rates, many people, including athletes, prefer to take the surgical route in the event of a Jones fracture.

Usually, a surgical procedure to treat a Jones fracture will involve the inserting of a screw into the metatarsal bone. Unless the screw becomes painful, it will be left there after the bone heals, helping the bone to twist and bend. There are variations in the technique for this procedure, which typically uses an x-ray in order to guide the screw into the right position. The usual recovery time is around six weeks.

Non-surgical treatments include immobilisation using a leg cast. This will involve the use of crutches, as no weight can be put on the foot during the immobilisation period. The cast is usually worn for a period of around six weeks.

As with all foot surgery it is normal for swelling to persist for some months after surgery and is completely normal. This swelling will eventually completely subside with time and can take up to 12 months but often goes well before this.