An ankle deltoid ligament injury is a serious injury which is relatively rare. It refers to an injury which is sustained to the ligament on the inside of the ankle. The medial ankle ligament – also known as the deltoid ligament – is tissue which provides a key role in stabilising the ankle joint. It consists of a superficial and deep part. The superficial part plays a role in resisting the eversion (turning inside out) of the hindfoot, while the deep part plays a role in resisting the lateral displacement and external rotation of the talus (an ankle joint bone).

Ankle medial ligament injuries occur when the ankle and foot are forced to move beyond their normal range of motion, which leads to the stretching or tearing of ligament fibres. Because of the deltoid’s size, it takes a large force to injury it, and this is reflected in the rarity of ankle media ligament injuries. Usually, an ankle medial ligament injury will be due to the rolling out turning, or twisting of the ankle. This can occur in isolation, or at the same time as another injury, such as a high ankle sprain or ankle fracture.

The predominant symptom of a deltoid ligament injury is swelling and pain around the whole ankle, especially the inner part. Bruising may also present itself, and it is common for individuals to have problems putting weight on the affected ankle following the injury. This can lead to difficulty walking, and a limp. A ‘popping’ sensation may be experienced at the time of the deltoid ligament injury. 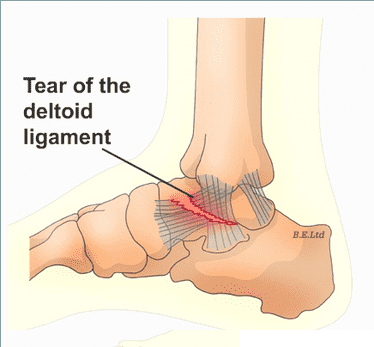 When diagnosing a deltoid ligament injury, a doctor may begin with a physical examination which checks the severity of symptoms such as swelling and bruising. Tests such as an MRI scan and x-ray can then be used to assess the nature of the ligament injury.

Immediately following a deltoid ligament injury, applying ice and getting plenty of rest are advised. Ice treatment – which can be applied for periods of 15 minutes at a time – helps to reduce inflammation. This can be needed for a few days until swelling and pain have subsided.

Over the counter pain killers can help to soothe the pain following a deltoid ligament injury. Gentle stretching is used to reduce pain and increase range of motion during the recovery period. A range of physical exercises – which can be performed at home – are also typically recommended to build the strength in the muscles around the affected ankle joint.

It is uncommon for a deltoid ligament injury to require surgery. Even in cases when there has been a complete ligament tear, surgical repair is not typically necessary, so long as the right recovery steps – including immobilisation – are taken.

Surgery is indicated for people who after having recovered from this injury end up with medial ankle instability. This can cause recurrent falls and medial ankle pain. Surgery for this involves reinforcing the damaged ligament with a tendon transfer. Cadaver tendon is commonly used and routed through the medial malleolus, talus and calcaneus just as the normal ligament would attach to. Surgery can involve up to 6 weeks in either a plaster cast or a boot with weight bearing allowed after 2 weeks.