Talonavicular arthritis refers to arthritis in the talonavicular joint, which is comprised of the navicular and talus. This joint is essential to the side to side motion of the foot while walking and is known to be a complex joint.

Talonavicular arthritis can cause pain close to the ankle, and lead to bone fragments growing over the joints. 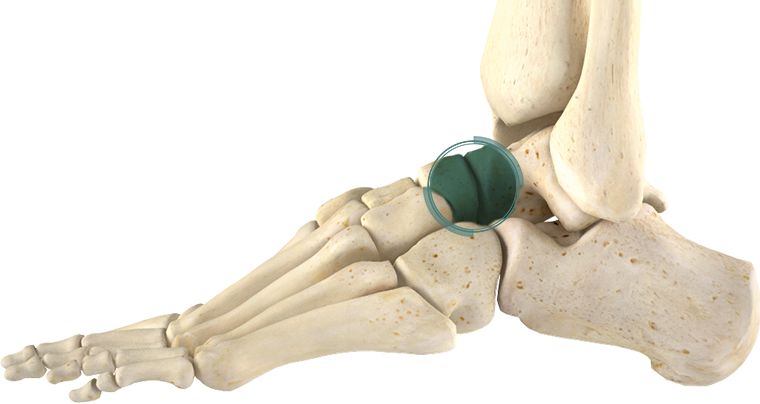 If you have talonavicular arthritis, you may develop a joint deformity over time as your foot changes shape. You can also experience an inhibited range of motion.

There are a range of imaging tests and investigations which can be used in making a diagnosis of talonavicular arthritis. These include; x-ray, CT scan and MRI scan.

Among the non-surgical options which can be used to treat talonavicular arthritis are; wearing modified footwear which is designed to support the talonavicular joint and relieve pressure on the midfoot; modifying your physical activities with a period of rest, avoiding high impact exercises and sports; orthotics, such as shoe insoles which can stiffen the midfoot and ease symptoms; walking aids such as a boot, cane or stick; physiotherapy which focuses on exercises to strengthen the muscles around the talonavicular joint and improving range of movement.

Medications which can be used to treat talonavicular arthritis include analgesics such as paracetamol, as well as nonsteroidal anti-inflammatory drugs such as ibuprofen.

When non operative treatment fails to work, surgery may be considered appropriate to treat talonavicular arthritis. Surgery involves fusing the talonavicular joint by removing the arthritic cartilage and holding the bones firmly together with metal plates and screws. This often involves a once night stay in hospital and a 6 week period of non weight bearing in a plaster cast followed by 6 weeks of weight bearing in a boot.

As with all foot surgery it is common for minor discomfort and swelling to persist for some months after surgery and is completely normal. This swelling will eventually completely subside with time and can take up to 12 months but often goes well before this.