Although there is no recognised direct cause of osteoarthritis, pain in the calcaneocuboid joint is known to be caused by abnormal biomechanical stresses, which can occur during physical exercise or through repetitive motion. Previous injury or fracture into this joint can also cause arthritis here.

The symptoms of calcaneocuboid arthritis can include; pain when standing up after lying down or sitting down for an extended period; pain on the outside of the foot; and a marked increase in pain when walking in bare feet. 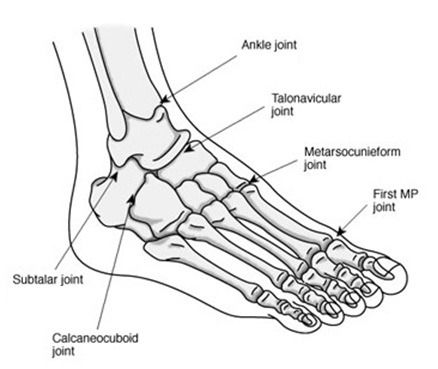 There is a range of orthotics solutions which can help to address the symptoms of calcaneocuboid arthritis. These include a number of insoles which help transfer the pressure of body weight to the medial column from the lateral column, and also limit the calcaneocuboid joint’s motion. Insoles can serve to control how the foot moves from side to side, which occurs when walking. For those with severe pain, a controlled ankle motion (CAM) walking boot can be used.

There are anti-inflammatory painkillers which can be used to address pain from calcaneocuboid arthritis, including; ibuprofen and naproxen. Always check with your GP if taking these medications are safe for you first. Steroid injections can also be given and often have a dramatic pain-reducing effect. This effect is temporary though. Often the first injection lasts the longest and after about 3 the effects can be very short-lived.

In cases where surgery is required, the calcaneocuboid joint can be fused together. The procedure, which is typically carried out under a general anaesthetic, involves the surgeon making in an incision at the outside of the foot, in order to access the subtalar joint, allowing surfaces to be cleared and sometimes reshaped, correcting any deformities, and in some cases adding extra bone in order to enhance the correction and speed up healing. You can expect to remain in the hospital for one night following a calcaneocuboid joint fusion.

As with all surgical procedures, there is some degree of risk, including wound infection, numbness to the outside of the foot and non-union.

As with all foot surgery, it is common for swelling to persist for some months after surgery and is completely normal. This swelling will eventually completely subside with time and can take up to 12 months but often goes well before this.