A plantar plate injury refers to an injury to one of the strong ligaments on the underside of the foot. The plantar plate is a tough fibrocartilagenous structure which attaches the proximal phalanx to the metatarsal head, going through the forefoot’s joint capsule. The plantar plate plays an important role in keeping the toes in place, stopping them from drifting or over-extending.

The most common cause of a plantar plate injury is an overload of pressure on the metatarsophalangeal (MPJ) joint. This leads to strain which eventually causes attenuation and a tear in the plantar plate area. It is this tear which leads to the pain and instability which characterises the injury.

Plantar plate injuries usually occur gradually over time, although in some cases they can occur suddenly. Among the ways which they can develop are; bunions, which put pressure on the plantar plate and can push on the 2nd toe, dislocating it; biomechanical abnormalities, such as a long 2nd metatarsal, or elevated 1st metatarsal; and a cortisone injection, which sometimes has a side effect of thinning and weakening the plantar plate ligament.

The main symptoms of a plantar plate injury include; the toe changing position, which occurs gradually as the tear increases, usually to the side or upwards; pain, which is usually a sharp pain located in the ball of the foot, or a dull ache, which can make it feels like there is no cushion between the ground and the bone; swelling; and a chronic plantar plate injury, which can develop if a plantar plate injury is not treated adequately, and can lead to the deformity to become greater, arthritis, and a higher level of pain. 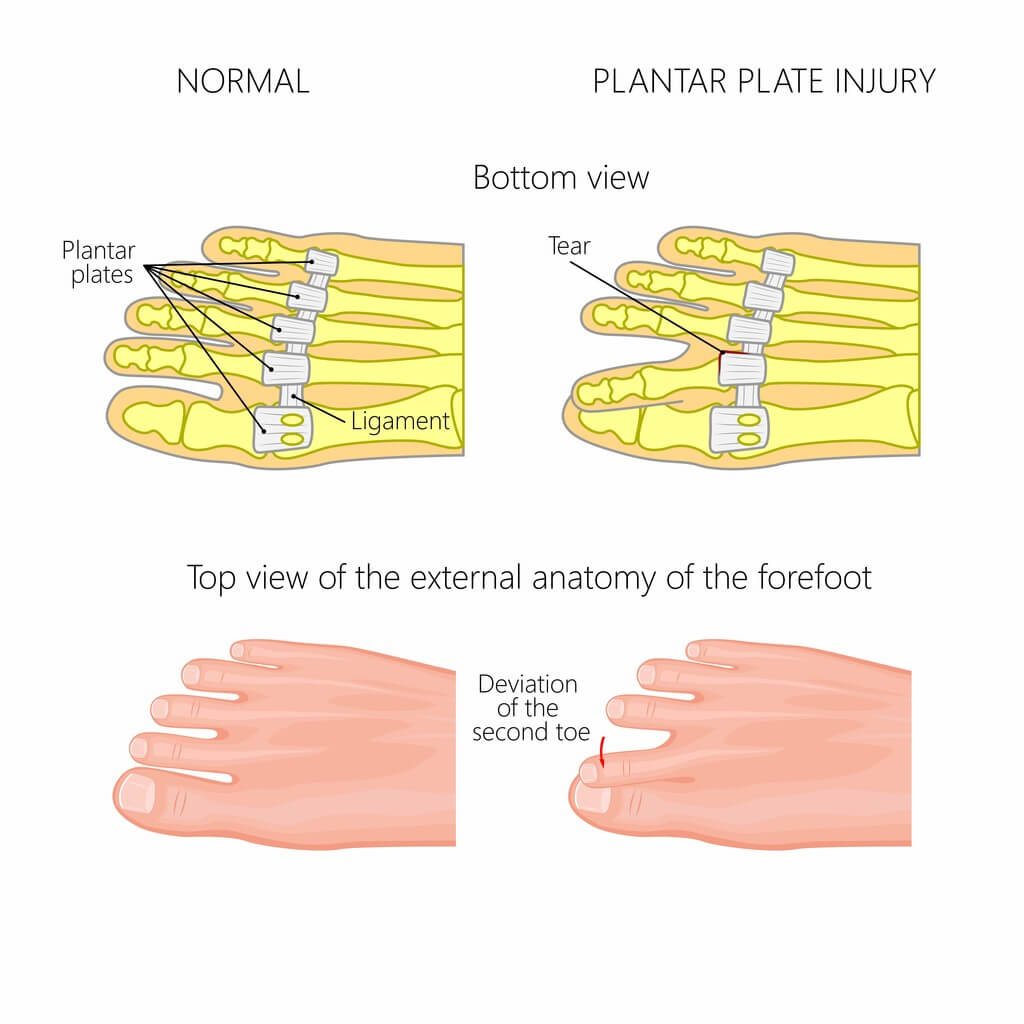 A plantar plate injury is usually diagnosed firstly via a physical examination, which can involve the doctor moving or manipulating the affected toe. X-rays and additional imaging tests such as MRI scans can also be used to confirm a plantar plate injury.

Among the non-surgical treatments which can be used to treat plantar plate injuries are; rest; ice treatment; and the strapping of the toe and the use of accommodative padding to ease the effect of the weight which is placed on the MPJ joint. Boots can be worn in order to take the pressure off the ball of the foot, along with taping which holds the toe in a position that allows the ligament to heel better.

Orthotics – such as inserts and supports which are placed under the ball of the foot – can be prescribed. Nonsteroidal Anti-inflammatory Drugs (NSAIDs) such as ibuprofen can be used to relieve pain.

Often surgical treatments will be needed in orders to correct the problem. Surgical procedures which can be used include; the hat-trick procedure, which realigns the metatarsal bone; and complete plantar plate repair system, which uses a suture passing approach and anatomic repair to realign the joint.

As with all foot surgery, it is common for swelling to persist for some months after surgery and is completely normal. This swelling will eventually completely subside with time and can take up to 12 months but often goes well before this.