The main direct cause of superficial calcaneal bursitis is too much friction or rubbing against the skin which lies over the Achilles tendon. Causes of this friction can include; direct trauma or injury to the bursa; too much running, walking, or another type of physical activity; wearing ill-fitting footwear, especially high heels; regularly undertaking an activity which involves repetitive calf contradictions, such as dancing, climbing or rowing.

The main two symptoms of superficial calcaneal bursitis are pain and swelling. If you have superficial calcaneal bursitis, you may experience intensified pain following physical activity, or on the morning after physical activity. The condition can lead to inhibited movement on a daily basis and result in a limp. The most pain may be felt in the area which is directly above the bursa.

Superficial calcaneal bursitis can cause the heel to become very swollen and red. In turn, this can lead to more problems fitting into shoes, and discomfort when wearing them. 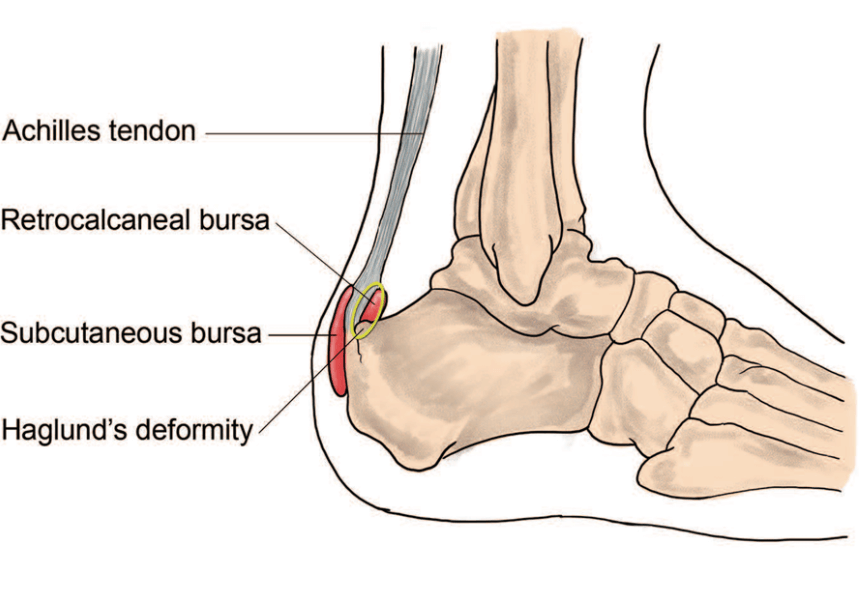 A range of tests may be conducted in making a diagnosis of superficial calcaneal bursitis. These include x-ray, ultrasound, and an MRI scan.

Non-surgical treatments are considered first when addressing superficial calcaneal bursitis. These include; indirect ice treatment, using a bag or towel, when painful symptoms of superficial calcaneal bursitis flare-up; resting, including the avoidance of high impact sports and other activities which are known to trigger painful symptoms of superficial calcaneal bursitis, and switching to sports with less impact on the heel, such as swimming; an avoidance of footwear which triggers symptoms, such as high heels; modified footwear, which can include more soft padding at the heel in order to ease pain; stretching exercises at home, which can serve to increase the range of motion in the heel and foot; and physiotherapy programmes that include exercises to achieve biomechanical correction, and to strengthen the muscles around the heel, also improving flexibility and range of motion.

Medications which can be prescribed for superficial calcaneal bursitis include analgesics such as paracetamol, as well as nonsteroidal anti-inflammatory drugs such as ibuprofen.

Anti-inflammatory gels can be used to treat superficial calcaneal bursitis. When applied over the skin they can reduce inflammation.

Occasionally a surgical procedure would be advised as a treatment for superficial calcaneal bursitis. In these cases, a surgical intervention could be a procedure which is focused on removing the inflamed bursa.

As with all foot surgery it is common for swelling to persist for some months after surgery and is completely normal. This swelling will eventually completely subside with time and can take up to 12 months but often goes well before this.