An MTP joint dislocation refers to the dislocation of one of the metatarsophalangeal (MTP) joints. It typically occurs in the second toe. It is associated with two other conditions – a big toe bunion deformity, and a crossover deformity.

An MTP joint dislocation is usually directly caused by either attenuation or a tear of the plantar plate. The plantar plate attaches the base of the toe to the ball of the metatarsal. It is a thick ligament which provides crucial stability to the MTP joint, preventing the toe from dislocating.

There are also several conditions which are understood to increase the risk of an MTP joint dislocation developing. These include; crossover toe, bunion deformity, instability of the 2nd MTP joint, big toe joint arthritis, plantar plate injury, inflammation of the MTP joint lining (synovitis), a long 2nd metatarsal or a short 1st metatarsal, biomechanical imbalances in the foot, Freiburg’s disease and rheumatoid arthritis.

The predominant symptoms of an MTP joint dislocation are pain and swelling. Pain is typically experienced on the sole of the foot, where the ball of the MTP toe joint is located. Pain can also be felt at the top of the foot near the MTP joint. Toes rubbing against footwear is known to trigger pain.

Swelling is usually more noticeable in the latter stages of the condition, if it is left untreated, as are the deformities which are linked with MTP joint dislocation, such as hammertoe and the crossover deformity.

Calluses and ulcers on the skin at the base of the MTP joint – as a result of the abnormal weight load or rubbing against footwear – are also common symptoms. 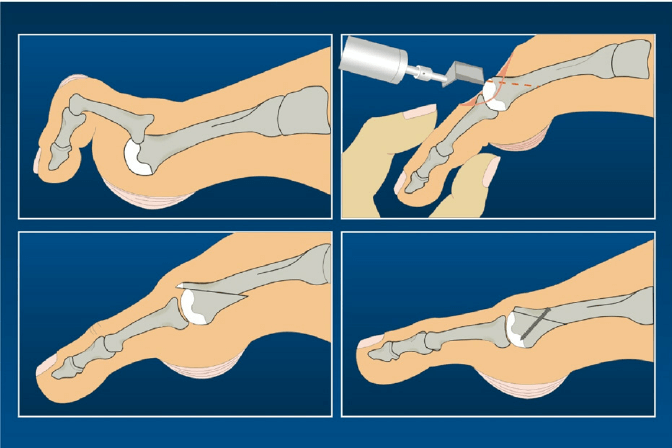 In order to diagnose MTP joint dislocation, a physical examination would typically be required, followed by imaging tests such as an x-ray or MRI scan.

Once the MTP joint dislocation has been confirmed, there are a number of treatment options available, including strapping or taping, which, provided a fixed deformity has not already occurred, can realign the toes, offering relief and stability; silicon toe sleeves which serve to protect the toes from rubbing against the footwear; a change of footwear to shoes with stiffer soles, providing more protection to the MTP joint; and orthotics, such as inserts which serve to ease the pressure on the MTP joint or insoles with recesses for calluses.

Nonsteroidal anti-inflammatory drugs (NSAID) such as ibuprofen can reduce discomfort in the case of inflammation.

Depending on the nature of the condition, there are a range of surgical procedures which can be used to treat an MTP joint dislocation, including; bone procedures such as PIP joint fusion and a Weil’s osteotomy; soft tissue operations such as extensor tendon lengthening and 2nd MTP joint capsular release; and combined bone and soft tissue procedures.

As with all foot surgery it is common for swelling to persist for some months after surgery and is completely normal. This swelling will eventually completely subside with time and can take up to 12 months but often goes well before this.